The End of Trench Warfare 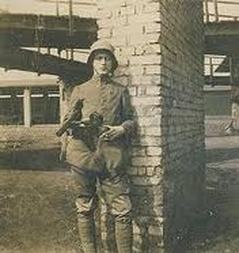 German Stormtrooper
Although trench warfare was very important throughout the war, the strategy neared an end around 1918, beginning with the Kaiser’s Battle. In 1918, Germany came up with a plan that involved a strong offensive strategy, contradictory to the defensive trench strategy used throughout the war. They did this because they were desperate to win the war and they saw that fighting in the trenches was not going to accomplish this. The development of new strategies that were different from those used in the trenches brought an eventual end to trench warfare towards the end of the war (Yves le Maner November 4th 2012). One of these strategies was the use of storm troopers. These were groups of soldiers who targeted specific objectives that were critical to the enemy. Storm troopers were special because they were the first of their kind. No other countries attempted to switch up their strategies the way that Germany did towards the end of World War 1. They were a foreshadowing of the Blitzkrieg tactics used in World War 2 and because they were used as an offensive strategy, storm troopers contributed to the end of trench warfare. Although not used in the Kaiser's Battle, tanks were also introduced in World War 1 and as they were developed and improved throughout the war, they also took the place of the defensive strategies of trench warfare. Trench warfare was widely in use throughout World War 1, but as the strategies and tactics changed on the battlefield, trench warfare soon became obsolete.